The name of this holiday literally translates to “float a basket”. And that is what I did. There are a few different ideas about what the festival celebrates. Most say the festival comes from an ancient ritual of paying respect to the water spirits. In addition to that you cast a krathong into the river to make a wish or cast away your sins or evil spirits.

There is a similar tradition in Judaism, called Tashlich. It takes place between Rosh Hashana (the new year), and Yom Kippur (the day of repentance). The tradition says to go to a body of water and cast away your sins by symbolically throwing bread into the water. There are a lot of variations on this tradition, but as I was casting my krathong made of bread, the similarities struck me. I always really liked the tradition of Tashlich.

In Thailand, Loy Krathon is most commonly associated with those big lanterns that people set into the sky. We’ve all seen the pictures online: smiling faces holding their big white lanterns with a candle inside, while they fill with air. It is a truly beautiful and magical site. However, Thailand is slowly trying to do away with this aspect of the festival celebrations. Not surprisingly, thousands of lanterns with fire in them floating into the sky is bad for the environment. It also often leads to property damage.

We got our krathongs at the supermarket. They are made of bread and are dyed bright colors. Krathongs are often made of banana leaves and flowers. I also saw some made of brightly colored ice cream cones, arranged to look like flowers. There is a big effort now to avoid Styrofoam krathongs since they are not biodegradable and are bad for the environment. The krathong also comes with 3 sticks of incense and a candle. Apparently 3 is exactly the right number of incense because 1 or 2 is bad luck and 4 is just overkill. 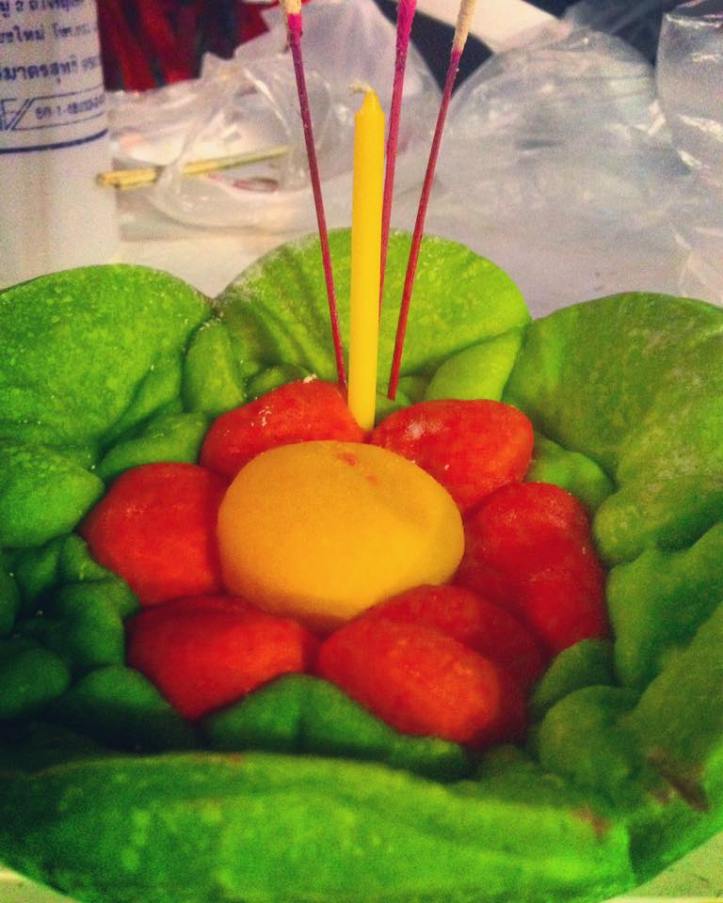 Along with hundreds of other people, we celebrated at a bar on the river. We saw lanterns in the sky from all over the city. They looked like stars heading home.

After setting my krathong in the river while simultaneously trying to avoid getting pushed off the dock by the masses, I watched a woman launch a lantern into the sky from the iron bridge. Then I watched the lantern get stuck at the top of the bridge. Then I watched the woman, in a maxi dress, climb up the bridge to try to set her lantern free. She gave up when hot wax started spilling out of the lantern, at which point another bystander climbed up. The whole crowd cheered when the lantern finally sailed into the sky.

Amazingly I only saw 1 tree come dangerously close to getting set on fire.

Loy Krathong should be celebrated in April near Songkran. The tradition at Songkran is to have one big, city-wide water fight. It seems ideal to have the holiday with giant floating lanterns of fire fall near the water fight holiday. This way there are more people walking around equipped to put out accidental fires. 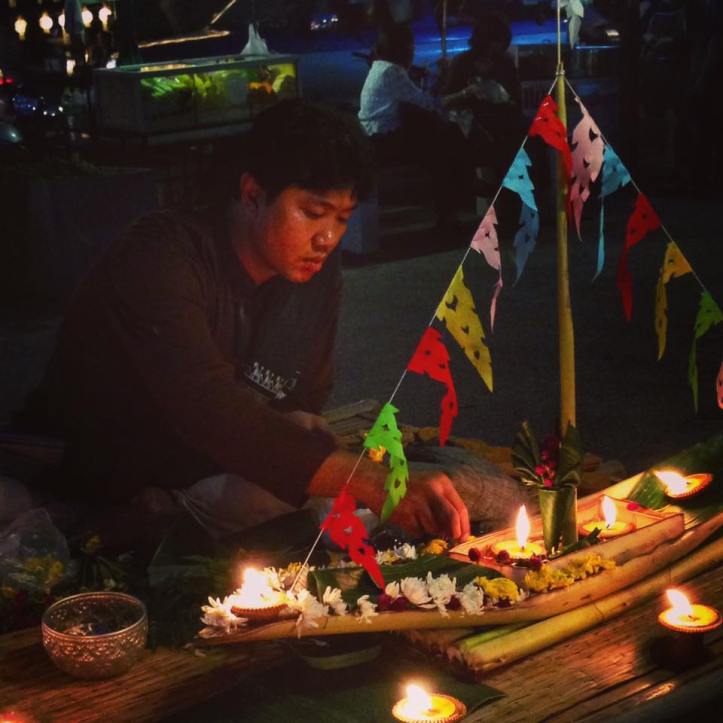