Pattaya for the Weekend

Pattaya is 2 hours from Bangkok by bus, making it a convenient weekend beach destination. There is literally no other reason to go there. It’s not a pretty city and it’s not a beach worth traveling out of your way for.

Pattaya seems to be really popular with Russian tourists. It’s interesting how some places just attract certain people more than others. So many Russian tourists go there that the signs are in Russian.

The first day there, we went to the beach in Pattaya. It reminded me of beaches at home: not very pretty, could be cleaner. Lots of extremely large men wearing extremely tiny bathing suits. Lots of people trying to sell us stuff we would never want.

The second day we took a ferry out to a nearby island called Koh Larn. Despite the fact that the first thing that comes up when you google Koh Larn is ferry crashes/accidents, we survived the roundtrip ferry ride. The beach on Koh Larn is much prettier than the one in Pattaya. The water is clearer and the sand is colorful. There were trillions of little multi-colored rocks. They almost seemed tie-dyed. I love collecting rocks. I’m like a little kid at the beach, picking up rocks and shells to take home. I keep saying I’ll make something but I never do. Collecting rocks is not an excellent hobby when you’re living out of your backpack and space and weight are precious. They’re just so pretty, I can’t help it!

Also, I had a piña colada served in a coconut. The perfect island beverage! 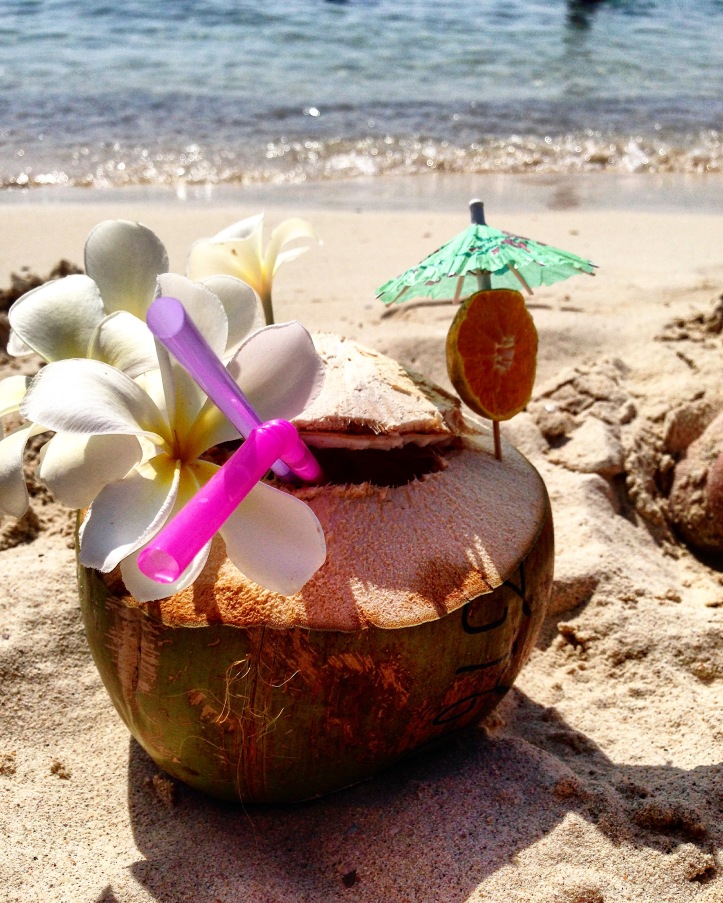 The majority of foreigners we saw were old, white (mostly fat) men. They all had young Thai girlfriends too. They’re all walking around town and sitting in bars next to Thai girls who are younger than me. Sex tourism is alive and well in Thailand. And no one is ashamed of it. No one tries to hide what they are doing. Yes some people fall in love and get married in Thailand and that is wonderful for them. That is not what was going on in Pattaya. Although, we did see an add in a songthaew for marriage visas. The pictures in the ad were of older white men and younger women. The ad doesn’t scream “true love.”

We did have fun though. With some good friends at the beach, you always have fun!