Another Visa Run, Another New Country

I went to Laos, with the students I’m working with, to get a new Thai visa that would let me stay in Thailand ’til the spring. Laos is my 21st country. Only 170 ish to go (depending on which official list you’re looking at)! 21 countries is no small feat. And some of those I visited more than once.

From Chiang Mai we flew to Udon Thani, a city in the northeast of Thailand, an area called Isan. I haven’t explored this part of Thailand yet. From Udon Thani we drove about an hour to the border. The Mekong river is the official border between Thailand and Laos. There’s a bridge that connects the two countries called the Friendship Bridge. A quick bus takes you to the other side. We needed visas for our very short stay in Laos too. It takes up a whole page. At the rate things are going, 2017 might be the year I run out of space in my passport (#lifegoals). Our destination in Laos is Vientiane, the capital.

We stopped at the Independence Monument on our way to the hotel. Laos gained independence from France in 1954 and commemorated with a monument that looks a lot like the Arc de Triumph. It’s got some truly SE Asian elements to it though. 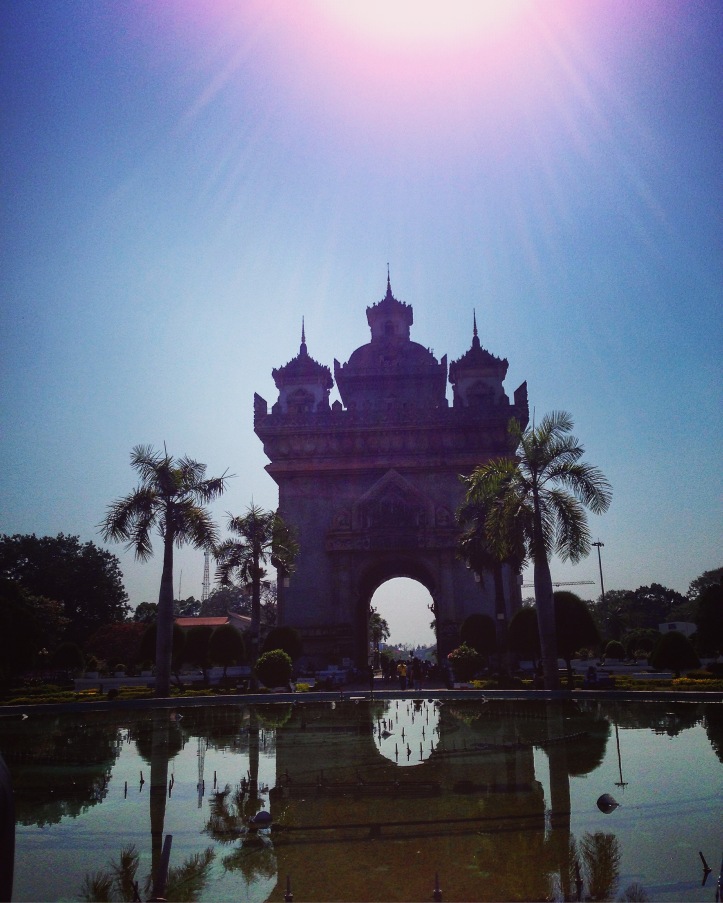 It seems like every big city in SE Asia has a night market selling street food and the same cheap junk. A staple is meet on a stick. Lots of different meats and fish on sticks. Lots of different chicken parts on sticks. I ate a chicken heart. Actually I ate 3 chicken hearts served on a skewer. A little rubbery. Apparently they could have been better, so maybe I’ll try again. What I refused to try is something I also saw in Cambodia: fertilized chicken eggs that I think are hard boiled. The guy I met who ate one in Cambodia said it was crunchy because the bones had started developing. My friend who tried one here said it wasn’t as developed, so no bones. Both said they were delicious. No thank you!

*Important fact: The s is silent in Laos. Also, no one says Laotian. The people, the language, the food, it’s all Lao.

I’m going to have to come back to Laos. Not doing much exploring on this trip. No time to see more of the country, and hobbling around town on a broken foot is slow, and difficult, and not super fun. So I’m not wandering around the city and letting myself get lost. And, as some of you might know, I like getting lost, and am really good at it.

For this visa run I needed to do more than just get my passport stamped at the border. We headed to the Thai embassy an hour and a half before it opened to get as close to the front of the line as possible. Our driver said hundreds of people line up at the embassy for visas every day. You could spend all day there. Luckily we were in and out pretty quickly. You leave your passport and all necessary documents at the embassy and go back the next day for your passport and new visa.

Visa success. I can stay in Thailand until May, then I’ll probably have to get a new visa.

Broken foot update: I’m cast free now! Still hobbling around, but NO MORE CRUTCHES. My ankle hurts. Being stuck in a cast for 4 weeks, I think my ankle forgot how to be an ankle. I’ve got a wrap thingy now to support my ankle and foot for the next 3-4 weeks. My foot is still broken, but it’s less broken and can now support my weight. The doctor said I don’t want my ankle to move too much because I don’t want the tendons to move too much and pull the bone apart. I can now shower properly and walk around without crutches. Hooray!