Well this one took forever to write…

Layovers can be unpleasant, making an already long trip even longer. My layovers are never long enough to leave the airport and see the city. On our way home from Sri Lanka, however, we had a 14 hour layover in Dubai, giving us plenty of time to see the city.

Dubai is the largest of the 7 emirates making up the United Arab Emirates (UAE). I had never been to the UAE, so this layover got me another new stamp in my passport! Known around the world for luxury shopping and huge skyscrapers, Dubai was recently ranked the 22nd most expensive city in the world. Most of Dubai’s money comes from oil, which was discovered there in 1966.

*This layover brings me to 9 countries visited during my year (and a few weeks) abroad: Thailand, Myanmar, Malaysia, Vietnam, Cambodia, South Korea, Laos, Sri Lanka, and the UAE.

June in the desert is….well hot doesn’t really cover it. The average temperature is 100 and above. From what I can tell, no one really goes outside except to walk from their air conditioned car to their air conditioned buildings and houses. Maybe that is why malls are so popular. Malls seem to be pretty popular in a lot of Asian countries, but Dubai takes the art of the shopping mall to a whole other level.

The plan was to meet up with Nina’s friend for lunch, then wander around THE mall and journey to the top of the Burj Khalifa. The Dubai Mall is the largest in the world. According to the mall’s website, it welcomed 80 million people in 2014. 80 million!  They’ve got a skating rink, movie theater, aquarium, and ALL of the nicest and trendiest stores. The mall is also attached to the Burj Khalifa, so you don’t actually have to go outside to get there.

Our visit to Dubai coincided with Ramadan (which you can learn about here). In Dubai Ramadan is observed in public spaces. This means that you shouldn’t eat or drink in public during the day, even if you are not observing Ramadan yourself. In the mall, several of the restaurants had big signs saying you could not sit and eat there, you had to take your food to go. In front of the food court there were big retractable screens and signs asking that you not take food out of that area. Once the sun sets, everything opens up again and people can be seen enjoying themselves in the many restaurants in the Dubai Mall and surrounding (very fancy) shopping area. After sunset there are more people out and about in general, due to both the insane heat and Ramadan. 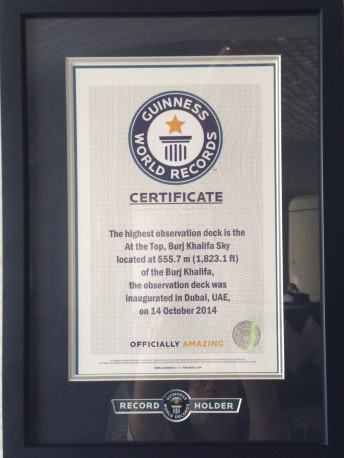 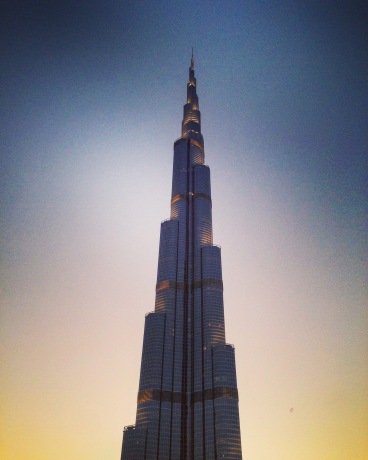 The Burj Khalifa is currently the tallest building in the world. It stands at 828 meters (2,165 ft) and 160 stories. It also holds the record for:

Can’t go to Dubai without going ALL THE WAY to the top of the tallest building in the world. For someone who loves climbing to the top of things, this was pretty epic. The observation deck at the Burj is literally as high as you can go without being in an airplane. The tippy top of the world!

Not surprisingly, the whole experience was fancy. First we waited in a snazzy lounge and laughed about the ticket price (like the building, it was quite high). Then we were escorted by a tour guide to the elevators, after passing several posters and models explaining the building process. A different person was in charge of pushing the buttons in the elevators. All elevators (even the ones in boring office buildings) should have a light and sound show, people would be much more cheerful at work.

2,165 feet; can you imagine working or living up there?! First of all, you’d have to build extra time into your commute for the elevator rides.You’d probably always pack a lunch because going out for lunch would take forever. How do you evacuate a building like that in case of emergency? Maybe they have emergency parachutes. If the elevators break are you just stuck? I guess if you’re training to climb Mt Everest you could do it on the stairs of the Burj Khalifa.

Dubai has several other big skyscrapers, but from the observation deck on the 148th floor even the next tallest building looks tiny. Despite the elevation, there really wasn’t a breeze when we went out to the observation deck, it wasn’t cooler. Other than be amazed at the height and take pictures, there isn’t anything exciting to do up there, so after taking tons of photos from every angle we journeyed back down to earth.

Dubai was….fascinating. Probably not a city I would have visited if not for this layover. We didn’t see too much of the city. It doesn’t seem like a super walk-able place. We saw the main event though: the Burj Khalifa.

Always climb to the top.

One thought on “A 14 hour layover in Dubai”